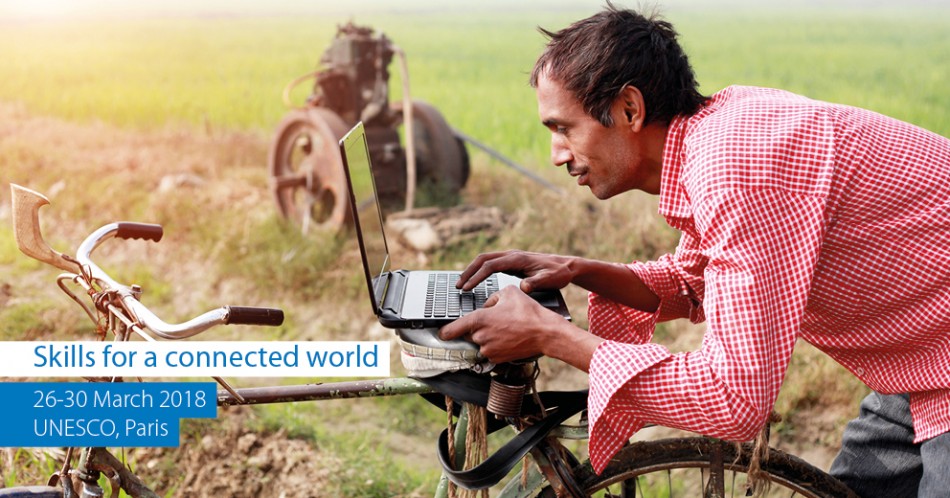 The future of Digital skills education

It was a great experience to present at Mobile Learning Week at UNESCO in Paris in March 2018. The different approaches that countries are taking to meeting the needs of a fast based digital economy were truly enlightening and the UN see this as both a major challenge and also an amazing opportunity to bring the globe closer to a level playing field of talent distribution.

It was also refreshing to experience that most of us recognise that the systemic approaches to digital skills education that were taken 15 years ago were in the main ineffective. Why? Because the platforms and technologies that came into play were not predicted and had far reaching consequences that no one could completely forecast. Think about the impact of Smart phones,Google,Facebook, Linkedin, Twitter and Instagram on the way we interact, communicate and do business. These services did not even exist or were in complete infancy and the digital skills education in the early 2000s was more focussed on using a word processor and building a basic database.

What we have learnt from this is that we are pretty sure that we also won’t be able to accurately forecast the next suite of digital services that arrive within the next decade or their impact on our day to day work/life functions. That is OK. It is fine to plan in an atmosphere of uncertainty- we need to embrace this and focus on the way in which we learn and the abilities to find the information to solve complex problems rather than memorize a rigid set of instructions or procedures. Learning to learn efficiently and effectively in a dynamic environment is where we need to focus our educational efforts.

What does this say about our schooling system? It was fantastic for seeing us through the Industrial revolution and the early boom of resources but is it the best structure for where we are heading? Some countries have bravely wiped the slate clean and are starting again with a blank page. This has many risks associated with it as we have no idea what the output will produce and probably won’t be able to accurately assess it for another century. BUT it is pretty clear that patch work approaches to the current schooling systems will most probably be cumbersome with overloaded curriculums and a teaching staff that is overworked and a mismatch for a vast amount of the materials delivered (not to mention underpaid as is the case in the majority already).

It also became apparent that government and world organisations need to be more flexible with their policy creations and realise that new technologies do not fit in with existing legislation and there is no way that all governments can effectively digest the new technologies fast enough to create appropriate policy. They need to be more fluid with the way in which guidelines are created and work more effectively in partnership with industry to avoid sudden damage control investigations and senate hearings. Business is moving at light speed and to sit outside of the circus and sporadically throw legislation in that is typically outdated by the time it is passed is not helping our global economy or protecting the actual rights of the individual consumer.

As the workforce also continues to get progressively more mature with people working longer and old jobs being replaced by new roles it is imperative that the digital skills training is not limited to youth and schools. There is no evidence to suggest that older demographics are unable to learn technology- the usual case is merely that they have not been given access to learning new skills and have not had the adequate support from their employer. This is a major productivity issue that will continue to haunt the employer landscape unless addressed adequately.

Finally it was a hot issue in regard to the ownership of data. We have progressively been seduced with more and more free or low cost technology platforms but have actually been paying with our data (sometimes knowingly and sometimes implicitly). Some of the new innovations in Artificial Intelligence and Blockchain will further test and possibly protect our individual data and again precipitate a wide range of both challenges and opportunities for the modern citizen.